Your Secret Self Defense Sequence

When people come into my self-defense gyms one of the first things I teach them is to have a defensive response which they can master in a short amount of time. Meaning, I want them to have a defensive sequence of moves which unleashes an arsenal of attacks on the person who dares to attack them. It is not being an “encyclopedia” of martial arts knowledge, where you know 1,000 different fighting techniques. As Bruce Lee used to say, “I do not fear the man who practices 10,000 kicks once, I fear the man who practices one kick 10,000 times”. That is the lesson I want my students to get down. It is not the quantity of moves you know, but the quality of the moves you know, and being able to unleash that fury like an unconscious machine gun of techniques. Therefore, I challenge my students to have a series of self-defense moves, where one technique follows another and then another. Because most threatening situations start where there is distance between them and the opponent, we usually start off with a “long range” move such as a kick. Then we continue with a middle range move such as hand strikes, finally ending with close quarter tools. I also usually alternate high line moves (i.e. shots to the face) with low line moves (for example, attacks to the knees and groin). I do this not only because it is difficult to defend both lines simultaneously, but because high lines usually effect the attacker’s ability to see, while low line attacks disable their ability to move. If you can disable both, your defense response will be easier. What I’d like to do is show you two of my favorite defensive sequences taken from Krav Maga, which you can learn and practice right now. You can practice them against a punching bag, a partner or even just up against “air”, like you’re shadow boxing. Once again, the point is to have a set of moves ingrained, where you could do them in your sleep if need be.

There are three ingredients for a successful sequence. The first is that the response is immediate. The faster we can react to a threat, the faster we transfer the element of surprise back to our side. If we wait to see what our attacker uses to attack us with, then we are reacting and thus our response takes longer. Furthermore, if we curl on up into the fetal position, or do nothing but play defense, we are giving complete control over to them. The second ingredient is that it must attack multiple targets. Using different strikes to attack the opponent’s face becomes easier to defend and predictable. The goal is to attack multiple targets, giving multiple shots of pain to the attacker. That is why I suggest using a high-low-high or low-high-low attack pattern in order to make it more difficult to defend, while also keeping the opponent off balance. This aides in striking multiple targets, but also helps create an unpredictable striking pattern and creates openings to attack unguarded targets. The third and final ingredient is that whatever your sequence is must be adaptable, meaning although we’re practicing a specific set of moves, you cannot get frazzled if something goes off track. A boxer could practice a jab-cross-hook combo, but they might have to adapt if they get countered, or the opponent moves in too close or simply moves away. The point here is to keep going. Aggressiveness always makes up for mistakes, Murphy’s law and even lack of technique. If something fails, keep going.

The first sequence looks like this: Front Kick ---> Palm Strikes ---> Knee Strikes You can use this as an example, or create your own off this template. The first move is a kick right up the attack’s “A frame” or groin area. This front kick is found in many different arts, but let me further explain a couple finer points with this Krav Maga move. As you can see in the illustrations, you will want to lean the top half of your body back slightly for balance, as you launch your knee forward, and end it with the bottom half of your leg snapping forward as your pointed foot makes contact with the person’s groin. 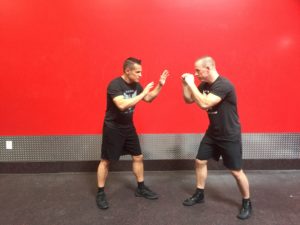 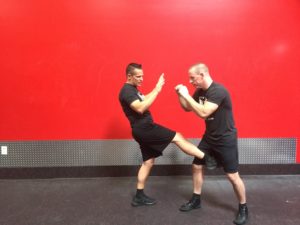 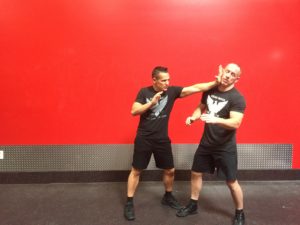 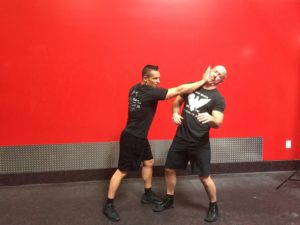 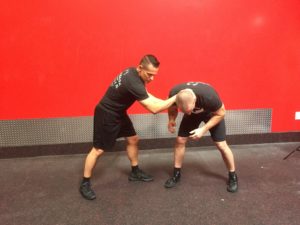 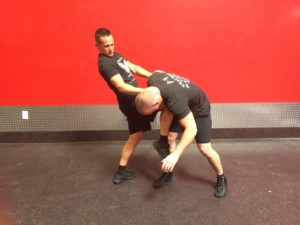 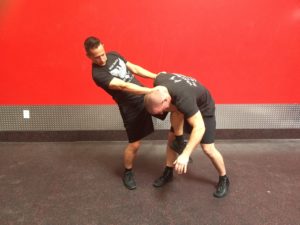 Next, using the heel of your palm, deliver a one-two boxing combination such as a jab-cross right to the middle of the attacker’s face. Make sure your whole body is behind the move, as your weight shifts and hips rotate with each strike. Finally, we’ll end this altercation with a series of knee strikes as we “clinch” up by grabbing the back of the opponent’s neck and arm as noted in the pictures. Keeping isometric tension in our arms (assisted by your elbows pointing down) to prevent an easy escape or attempted take down, you will have a myriad of targets to knee including the face, chest, stomach, groin and thigh.

Another example of a sequence, are the following four moves, however I want to use this example to make an even greater point. First, let’s take a look at these moves, as we assume the assault starts in a closer range: Head Butt ---> Hammer Fists ---> Stomp Kick ---> Face Smash The head butt is a quick bursting move which many times can take an attacker off guard by using an unconventional weapon as your own skull. Using the top of your forehead, you strike the opponent’s front of their face. Any pressure, much less the power of a thrusting head butt will cause the attacker to grab their face, which opens up a great opportunity for hammer fist strikes. Because their face is most likely covered up with their own hands, having the target of the brachial area where the side of the neck meets the collarbone is a perfect vulnerable area, as several nerve centers are also located there. 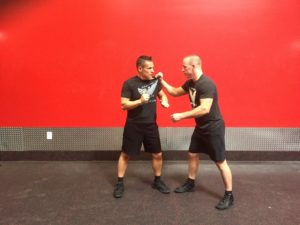 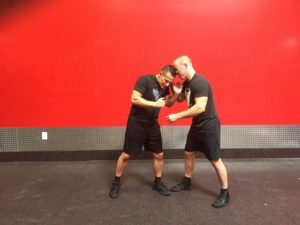 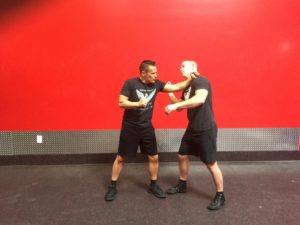 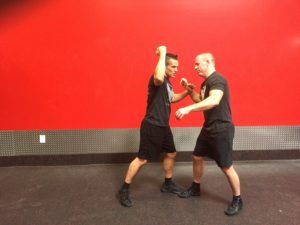 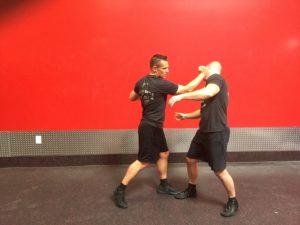 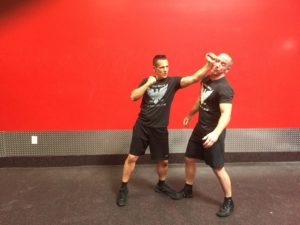 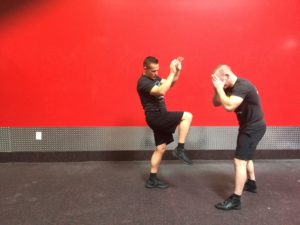 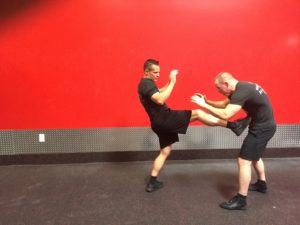 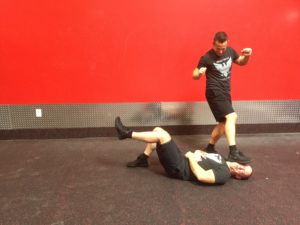 After one or several hammer strikes (we’ll use four in this sequence), using a stomp kick to strike the person’s midsection while also “pushing” back the attacker is the next move, which actually uses the bottom of your foot. Because of the daze of pain you inflicted on them it is common for them to fall down or pushed over, which is where we add an additional stomp kick or face smash.

Short to Long from Behind

Now, take a look at this sequence: Rear Head Butt ---> Low Hammer Fist ---> Back Kick ---> Achilles Smash If it looks similar to the previous one, it is, and here is where I want to make my point. This sequence works great in a close quarter situation, but if the attacker is attacking you from behind as shown in the illustrations. Just as in the previous set of moves, we use the head butt first, but use the back of our head because our arms are tied up. This shot of pain gives us an opportunity to strike low, using the same tool, the hammer fist, but striking low to the opponent’s groin or abdomen. Notice how I bend down as I throw my fist backwards to strike the target with my balled up fist. 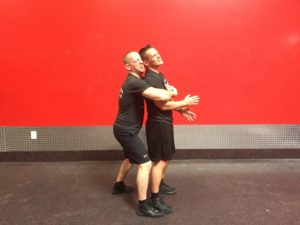 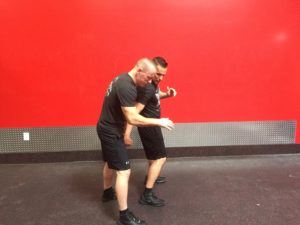 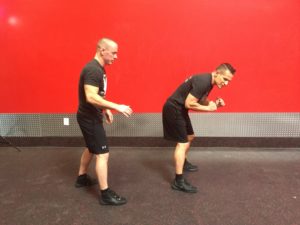 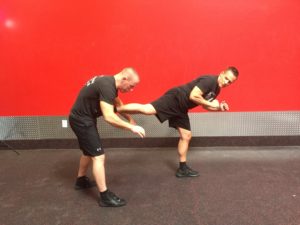 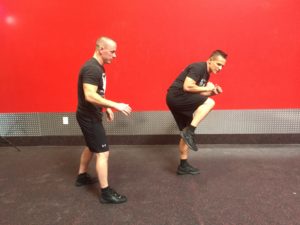 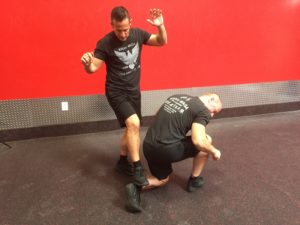 Because our back is still facing the attacker, instead of using the stomp kick to push them off, we use a back kick. With the back kick, we bend over, cock our leg forward and then shoot it back at the attacker. Because they have not gone all of the way down to the ground yet, instead of using a face smash move, I strike the Achilles portion of the back foot, which will most likely take away any attempt of mobility and to chase us.

The reason why I used these to last sequences was to show you that you can use the same “game plan”, but can adjust the tools depending on your position and distance from the attacker. You can still use the high-low-high principle of striking a high line, then a low, followed by another high line move, etc. They both used longer range tools as the sequence went on, because the opponent will be moving back after being struck with each move. In both sequences, you can use the stomp or back kick to gain distance for your escape, or use one more “finishing” move like the face or Achilles smash to take the attacker out of commission. Taking priority over everything the goal is to create a knee jerk reaction, which immediately unleashes an attack on your opponent if they ever attack you. Therefore, you want to build a series of moves which attacks multiple lines of attack and different targets. You have to assume that you are against a bigger and stronger opponent, and as a result must give them multiple blows to varied pain centers.

The Goal of All Self-defense

You may only enrage an attacker if you punch him on the side of their face, however if they have to deal with a shot to their nose, strikes to their brachial area, a kick to the groin and several knee strikes to the stomach, it is harder to recover, catch their balance and even see clearly. Remember, you only need to put someone down for a couple of seconds in order to make a successful escape. Our goal is not to maim or kill, but to put enough hurt on our attacker that they cannot physically fight back for 3-10 seconds. That will allow you enough time to survive. In tying up this topic the first thing you need to do is to create your own sequence. Put together a series of moves which makes sense to you. I once again suggest a long to short range sequence, and make sure you integrate the high-low-high principle, attacking several different targets. Finally, practice it. Then practice it again and again. Ingrain the sequence in your mind, where you could pull a mental trigger and unleash it’s power immediately on anyone who threatens you. Focus on the mechanics of the movements, not just the speed and power. Flow from one move to the next, and that fluidity will develop into faster and more powerful strikes, rendering a machine gun like set of moves which will leave your attacker in shambles.

Take the next step and join us for a FREE class!